Getting Prepared for Challenges in post-Afghanistan, post-Ukraine Era

“In an unpredictable world, NATO remains an essential source of stability.”.[1] Rasmussen.

In a suburban neigbourhood called Evere, in Brussels, a new NATO headquarters is rising, just across the street—Boulevard Leopold III—opposite the ‘old’ one. The current building has been in service since 1967 when NATO was ‘invited out’ of France.[2] The decision to build this ‘edifice’ was taken at the Washington Summit in 1999 to replace “NATO’s temporary headquarters” as it came to be called in the course of Eastward ‘expansion’. Belgium was asked to manage the contract (of 1 Billion Euros, with additional costs) on NATO’s behalf. After a long process of design competition, bidding and contracting, construction work was started in 2010 and Belgium is expected to hand over the building to NATO in 2016—if it can be finished on time.

What is ‘new’ in NATO is not only this ‘building’. During the Lisbon Summit in 2010, NATO leaders adopted a new Strategic Concept. It was based on three pillars; collective defence, crisis management and cooperative security. Lisbon Summit also decided to streamline NATO’s political and military structures. In June 2011 defence ministers decided to make the Command Structure leaner, affordable and more effective, and reduce manning by one third. The new Command Structure will be fully implemented by end 2015, next year.

New NATO Headquarters is rising across the street.

Anders Fogh Rasmussen became NATO Secretary General in 2009 against Turkish objections related to ‘cartoons’ controversy, among others. His attitude as Danish Prime Minister then was discomforting, to say the least, to the Turkish government of Tayyip Erdogan. Hurdles were overcome and even his tenure was extended by one year in 2012, to July 2014. Therefore, the next NATO summit in September in Newport in Wales will be his last one. (His term was re-extended to 30 September) In other words, in addition to a new strategic concept, new command and force structure, and a new headquarters building, fingers crossed, the Alliance will have a new Secretary General. The most likely candidate, according to reliable rumors, is Belgian Deputy Prime Minister and Defense Minister Pieter De Crem.

Minister De Crem recently appeared in the CIOR[3] Winter Conference at NATO HQ with SACEUR[4] Gen. Philip M. Breedlove (USA) and both, after delivering their speeches, answered questions, side by side. SACEUR, in his short speech addressed what he called ‘operational’ needs—common doctrine, training, education, exercises.[5] Minister De Crem’s was a typical and rather long ‘NATO’ speech[6], addressing almost all aspects of Alliance’s business, in other words, a long list of wishes and desires. The fact that both spared time for this unusually long—and unprecedented—programme and they did so ‘together’ was telling, reflecting the importance they were attaching to communication and public information. However, NATO’s (and United States’) top-general in Europe, sitting next to Mr. De Crem was a clear sign of support to this likely candidacy as the next NATO Secretary General. 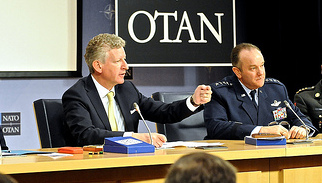 However, some developments are not as bright as official statements tend to express.

First of all, construction of the new headquarters is already delayed by about one year, to 2017. According to some reports the project has run into financial difficulties due to miscalculation, hence overbudgeting.[7] Although the subject is handled confidentially, it is already a common ‘secret’. Even if additional costs are accepted by NATO, i.e. member states, there is no guarentee that there will not be further ‘additional’ costs, nor will there be further delays. The risk to NATO’s prestige and to that of Rasmussen is clearly there. An embarrassing delay in the construction of the new headquarters on which so much publicity has been invested is the last thing he would want.[8] He has been preparing the ground for a hand-over of a ‘new’ NATO, fully transformed and more capable than ever—so the story goes—to meet the challenges of post-Afghanistan era, under ‘his’ leadership:

Over the past four years we laid a firm foundation for the future. We set out a clear

vision in our Strategic Concept, and we are turning it into reality. Our forces are more

capable and connected than ever before. We have a record of achievements in

challenging operations and world-wide partnerships. And we are continuing to adapt to

However, the reality is slightly different and some of the problems NATO is faced with today is so colossal that even the most talented speech writers cannot hide them from public scrutiny. The new headquarters building with its gigantic dimensions just symbolises them. Overbudgeting and the delay in the construction of this building is only a small fraction of the troubles NATO is faced with today. 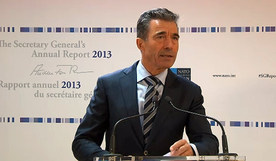 For ‘Collective Defence’, critical capabilities need to be developed and this requires meaningful investments by member countries. Against the background of global economic and financial crises, neither the resources nor the political will exist there. ‘Terminological’ inventions such as ‘smart defence’ do not help much, no matter how smart they are.. The same logic is applicable also to the other pillar of the new Strategic Concept, so-called ‘Crisis Management’, admittedly the newly invented term for ‘intervention’. This was first tested in the Balkans in mid-1990s and hastily applied to Afghanistan in early-2000s, with disastrous results. The fact that nobody—no NATO official—clearly spells out the failure does not mean that it does not exist. While NATO Secretary General is boasting about “bringing together over one quarter of the world’s nations” under ISAF[10], nobody really doubts how it will likely turn out once NATO—and USA—withdraws at the end of this year. Already, there are many ominous signs and there is very little if any progress in the area of ‘Connected Forces’, another new invention. But the real problem is in the domain of ‘Cooperative Security’.

In 2010, when the new Strategic Concept was adopted, this ‘principle’ was endorsed for paving the way for a really new international environment in which all peace-loving nations cooperate based on a novel concept of ‘common security’. But adopting a ‘concept’ is something, internalizing its meaning and behave accordingly is another. Although normally behavioral change precedes attitudinal change, in NATO’s case, attitudinal obstacles virtually blocked even the most noble initiatives. The application of this fundamental ‘principle’, particularly in Libya, proved extremely counterproductive. The way NATO involved in this country—ignoring United Nations Security Council resolutions, particularly 1973 (2011)—as well as the way certain members operated for regime change—rather than “protecting civilians”—destroyed the foundation of trust between nations world-wide for a long time to come and further damaged NATO’s prestige as an Alliance. To make things worse, there is a worrying tendency in certain NATO circles that can be summarised as “UNSC resolutions for NATO operations is desirable, but not necessarily necessary”. This false and defective understanding ignores not only UNSC and the UN Charter, fundamental principles of international law but also one of the basic pillars of the Strategic Concept and undermines it, by the very same NATO members who adopted the Strategic Concept in the first place. If the ongoing tragedy in Syria—which is basically and simplistically a victim of NATO’s Libyan operation—leads to reevaluation of this weird attitude, there is still some hope.

Based on the vast experiences of Afghanistan, Libya, Iraq, Kosovo, Syria and Georgia, NATO has to decide what to tell to the world and what kind of message to give; whether to become an actor or a player, to prefer cooperation or competition, to be really ready for global partnerships for security and whether NATO members really embrace their own Strategic Concept.

In ‘good old days’ running the ‘business’ was easy, piece of cake. NATO had only 16 members, the world was much less complicated and easier to understand. There was no internet, no satellite TVs, no social media. NATO was run based on decisions made practically by ‘Americans’—assisted by the British and to a certain extent, by Germans—almost perfectly, at least it seemed so.. Even France stood aside and maintained a distance. But today neither NATO with its 28 members is the same NATO, nor is the world the same world. Even the American people started perceiving the war in Afghanistan as new ‘Vietnam’ and questions it. An increasingly isolationist public mood—similar to that of in the post-Second World War era—is dominating the public opinion in this country.[11] The general air in Europe, including NATO members, has already long changed.

Colourful presentations, annual reports or attractive ‘power-point’ slide-shows, naturally, cannot conceal or hide hard facts. NATO, as a political alliance and a military structure is faced with serious and enormous challenges. Some of these challenges always existed, they recently just became more acute and more difficult to handle. At the basis of this cluster of problems is the problem of ‘leadership’. A new type of leadership, with a new sense of mission and a new vision, a more democratic, more transparent administration and policy-making culture—mindful of public opinion—can move NATO to somewhere quite different than where it was yesterday.  Otherwise, NATO, as an alliance has greatly lost its power, effectiveness and most importantly its ‘common’ will. A new building, even one worth of one-billion Euro cannot compensate for these fundamental weaknesses. A radical conceptual change and political transformation is an absolute requirement and this takes a new concept of a common leadership that is really conscious of hard facts. Of course this is not an easy job, but if NATO really aims to remain relevant in the future, this is a must..

It is highly unlikely that, with the old rhetoric and alliance’s—still persisting—classical but outmoded political ‘culture’, it can stand the challenges of a new world, with Mr. De Crem or somebody else.. An alliance is more than a sum of its members’ military and political capabilities, capacities and political will. The problem is not with the Strategic Concept but the fact that it is not taken as a ‘strategic concept’ per se by NATO members themselves. Afghanistan has been a test bed where the basic ‘concept’ was put into test long before it was officially endorsed, and has sadly failed. This was followed by Libya, Syria, and now Ukraine is providing yet another warning. As the geo-political landscape rapidly changing, NATO needs an urgent soul-searching. There is still time to utilise Newport Summit to this end. Bells are tolling ever louder..

[2] The first NATO HQ was in London, on a temporary basis, between 1950-1952. It moved to its first permanent location in Paris in 1952. However when France withdrew from NATO’s military structure in 1967, it had to be relocated to Brussels where it still is.

[4] SACEUR: Supreme Allied Commander Europe. This title/acronym is a legacy of the Cold War era, however it was maintained as a tribute to the history, along with SHAPE, Supreme Headquarters Allied Powers Europe. There is only one strategic level operational command today, Allied Command Operations/ACO and ‘SHAPE’ refers to the building where ACO is located rather than the ‘command’ itself.

[5] One ‘observor’ privately commented to me after the session that he was amazed to hear that what all SACEUR talked about was in the domain of Allied Command Transformation, ACT, the only other strategic command—under a French four-star general.

[6] Old ‘Guards’ in NATO describe long and often not too meaningfull talks as ‘No Action Talk Only, NATO’.

[8] This is also true for Minister De Crem who shares the (primary?) responsibility for the delay as the Defense Minister of the ‘host country’, and ‘the’ candidate for the post of Secretary General.

[10] ISAF: International Security Assistance Force. NATO assumed leadership of ISAF in August 2003, initially for Kabul area only, to be expanded to the whole of Afghanistan in October same year. 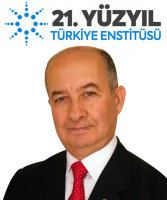